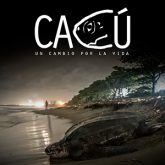 Five fishermen from Manresa, a poor neighborhood to the West of Santo Domingo, transitioned from sea turtle nest predators to conservationists of the species. Their four-year transformative process was implemented by marine biologist Omar Shamir Reynoso, who developed a one-of-a-kind plan in the Dominican Republic that involves fishermen and communities alike in conservation efforts.

Marvin del Cid, originally from Guatemala, holds a degree in Communication Sciences and has extensive experience in the visual and multimedia area. He worked for several media outlets in Guatemala and the Dominican Republic. Currently, he is working as an editor at Grupo Diario Libre in the Dominican Republic. He has exhibited his photographic work on many occasions, both individually and on group shows. He has won several prizes for photography in the Dominican Republic as well as abroad, including special mention in the Epifanio Lantigua Tourism Award in 2013 for his work on Dominican Treasures. He has won Epifanio Lantigua journalism award on several occassions (2014, 2016, 2017) in the category of Sustainable Tourism, and was the winner of the EWEA (Europe) Photography award in the Americas category.

Omar Shamir Reynoso is a Marine Biologist from the Universidad Autónoma de Santo Domingo (UASD), born and raised in the coastal province of Samaná, Dominican Republic. He has worked on marine mammal conservation issues since the beginning of his professional career. He has worked as a conservation technician in the Ministry of Environment and Natural Resources of the Dominican Republic until 2016 and as the Coordinator of Environmental Programs for Global Foundation for Democracy and Development (GFDD). He currently works on Oceanography and Marine Resources at the National Maritime Affairs (ANAMAR) of the Dominican Republic. Reynoso has published several works on Manatee, Humpback Whales and other species.