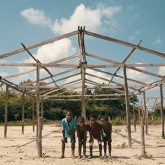 Frontera Invisible is the true story of communities trapped in the middle of the world’s longest war, in which big landowners’ rush for palm oil to produce ‘green’ fuel has displaced peasant farmers and indigenous people. It has destroyed natural habitats and concentrated land in the hands of the rich. One part environmental documentary and one part social research through victims’ testimonials, Frontera Invisible gives voice to the local communities that are fighting hard to reclaim their land while exposing the major pitfalls of biofuels policy.

Nicolás Richat holds a degree from Centro integral de Experimentación en Video y Cine, Buenos Aires. From 2003 until 2008, Nicolás worked for Buenos Aires TV channel Ciudad Abierta, where he experimented with different audiovisual formats and interacted with prominent artists from Buenos Aires and Latin America. Between 2010 and 2012 he worked for Ciudad Abierta as art director and focused on the recovery of the visual identity of the sole public tv channel in Buenos Aires. In those two years he created more than 120 hours of televised content, 15 series, 132 program episodes and 446 microprograms.

Nico is the director of communications for Transport & Environment, Europe’s leading NGO campaigning for cleaner transport and fuels. A tireless storyteller, Nico has told many stories in written and visual form. But Frontera Invisible is his first incursion on film documentary. He has been dedicated to work on biofuels since 2010 while consulting a top biofuels producer for global PR firm Weber Shandwick. After joining Transport & Environment, Nico campaigned extensively on the social and environmental impact of biofuels. While digging deeper in the matter, Nico developed the idea of the new biofuels frontiers, beyond the well-documented cases of deforestation and peatland drainage in Indonesia and Malaysia.