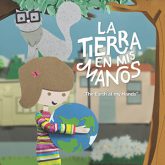 Mara (13) is an adventurous girl who is used to having it all and never thought about the importance of taking care of the environment. But things change when she discovers what is really going on with the Earth thanks to her cat Pantufla.

Nicolás was born in Benito Juárez, a quiet town in Argentina. During his childhood he always showed an interest in puppetry and used to perform at local schools with the very puppets that he made himself. After high school, Nicolás attended Universidad de Buenos Aires where he studied Image and Sound Design. There he became involved in cinematography and discovered the world of animation. The puppets from his childhood and new passion for animation united in “Yo te quiero!” his first short film and first Stop Motion animation, which has been shown all over the world at more than 130 international festivals and has received more than 50 awards and mentions. La Tierra en mis manos is his first television series using the Stop Motion technique.