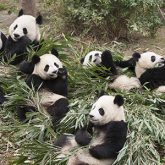 An American biologist embarks on a life-changing journey to China to help scientists breed giant pandas and introduce the cubs into the wild.

Fellman previously wrote and produced the critically acclaimed IMAX 3D documentaries “Born to Be Wild,” and “Island of Lemurs: Madagascar,” both also collaborations with David Douglas. “Born to be Wild,” which chronicled efforts to raise orphaned elephants and orangutans—both endangered species—in Borneo and Kenya, received the National Board of Review’s Top Five Documentaries Award in 2011 and won the Genesis Award that year for best feature documentary. Fellman began his relationship with IMAX working as part of Howard Hall’s diving team on the IMAX films “Under the Sea 3D” and “Hubble 3D.”