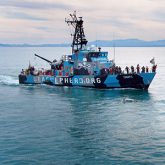 Sea of Shadows follows a team of dedicated scientists, high-tech conservationists, investigative journalists and courageous undercover agents as well as the Mexican Navy as they put their lives on the line to save the last remaining vaquitas and bring the vicious international crime syndicate to justice.

Richard Ladkani has gained international recognition for his award-winning feature documentaries. “Sea of Shadows”, a National Geographic documentary, executive produced by Leonardo DiCaprio, won the Audience Award at the Sundance Film Festival 2019. The film illustrates how Mexican drug cartels and the Chinese Mafia, have declared war on one of the world’s most beautiful ecosystems, which Jacques Cousteau once called “The Aquarium of the World” and the extinction of the vaquita, the smallest whale on earth. In early 2015 Ladkani and his wife, Anita, founded Malaika Pictures to produce films that shine a spotlight on the most pressing environmental and political issues facing the world today.