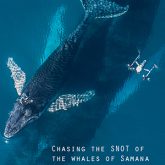 Film: Chasing the Snot of the Whales of Samaná

SnotBot is a project by OCEAN ALLIANCE that uses drones to capture the blow of whales and to then study all the biological matter that it contains. For the first time Snotbot uses this technology to take samples from Samana Bay. Every year whales migrate to the north of the Dominican Republic to breed.

Marvin del Cid, originally from Guatemala, holds a degree in Communication Sciences and has extensive experience in the visual and multimedia area. He worked for several media outlets in Guatemala and the Dominican Republic. Currently, he is working as an editor at Grupo Diario Libre in the Dominican Republic. He has exhibited his photographic work on many occasions, both individually and on group shows. He has won several prizes for photography in the Dominican Republic as well as abroad, including special mention in the Epifanio Lantigua Tourism Award in 2013 for his work on Dominican Treasures. He has won Epifanio Lantigua journalism award on several occassions (2014, 2016, 2017) in the category of Sustainable Tourism, and was the winner of the EWEA (Europe) Photography award in the Americas category.