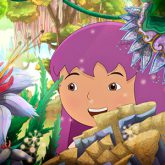 Lila is a character in a book who suddenly falls out of her paper universe and is stuck in another world where she doesn’t belong. This is the beginning of a great adventure, where Lila will come to learn that only Ramon, the boy that used to read to her years ago, can save her. But it will not be an easy task. Ramon is not the same as he once was; he has grown up and has not only given up reading, but no longer believes in fantasy as well. Lila and her new friend Manuela will therefore have to figure out how to convince Ramon of what is happening and together take on a risky trip to El Olvido, a dark place where the Libro de Lila has fallen. Throughout this adventure filled with magical worlds, the kids will discover the true value of friendship and the power of fantasy.

Marcela Rincón González was born in Colombia. She studied Social Communication and specialized in script writing for cinema and television. She has directed documentaries and worked as assistant director for feature fiction films. She is the cofounder of Fosfenos Media. LILA’S BOOK (2017) is her first animated feature film.