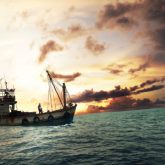 Ghost Fleet follows a small group of activists who risk their lives on remote Indonesian islands to find justice and freedom for the enslaved fishermen who feed the world’s insatiable appetite for seafood. Bangkok-based Patima Tungpuchayakul, a Thai abolitionist, has committed her life to helping these “lost” men return home. Facing illness, death threats, corruption, and complacency, Patima’s fearless determination for justice inspires her nation and the world.

Shannon Service is an independent reporter and filmmaker whose work has appeared in The New York Times, the BBC and The Guardian of London. She primarily focuses on crimes at sea, but her stories covered everything from the ravages of war to the intimacies of heartbreak. In 2012, she worked with Becky Palmstrom to break the story of slavery on Thai fishing boats for NPR’s Morning Edition. Shannon has won several reporting awards, including an Edward R. Murrow, and lives on a houseboat with her pet seagull, Fluffy.